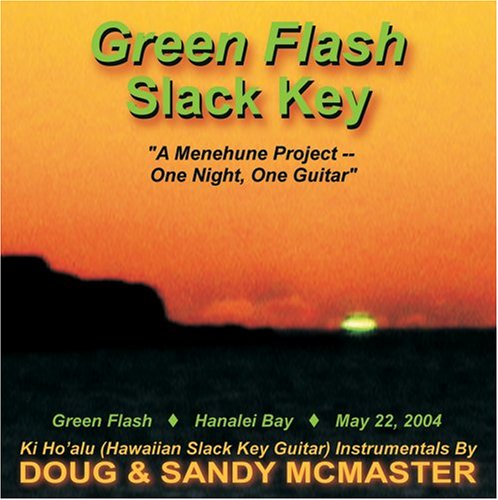 Have you heard a GREEN FLASH? The green flash is a phenomenon that occurs on rare occasions when the sun is just rising or setting. Usually they only occur when the skies are clear as a bell. This one happened in a small opening in the cloud horizon and was captured on the film May 22, 2004.

"Your Musical Lifeline to Memories of Hawaii" Just like the green flash, this recording happened in a unique moment in time... all in one night... just like the projects of the ancient peoples of Hawaii - the Menehune. The magic 'guitar of aloha' sang magnificently for this recording. It's story is included in the liner notes. It's voice speaks to the heart and creates a resonance which brings you right back to the peace and tranquility of Hawaii.

Throwing you your musical lifeline to memories of Hawaii, Doug amp; Sandy and the magic guitar bring you very special songs from the heart of Hawaii.

Twinkle, Twinkle is a sweet slack key rendition of the childhood favorite.

Michael's Song a gift from, and for our friend Michael who joined the spirit world after completing his earthly mission. At his celebration of life, he visited wishing special blessings for all who were in attendance... one at a time... fairy dusting them with gifts from beyond.

"span"Donkey Butt Strut is a concert favorite which honors a wonderful donkey (lived in a pasture near Nawiliwili Bay) who loved to dance to Kimo's Slack Key.

Boris Nui Loa celebrates the joy and happiness of Boris, a standard dachshund who recently moved to Kauai and has been working the beach and all the sunset 'ohana ever since. He's very coy, keeping a straight face, but his tail gives him away every time!

Kauai Sunrise is a Menehune song singing joyfully, like the roosters that do keep proper time, as the light of the sun brightens the sky bringing shimmering pinks, oranges, and yellows to the cobalt blue skies.

When Doug was six, he convinced his father to order a Roy Rogers amp; Trigger guitar from the mail order catalog. And he's been playing slack key guitar - ki ho'alu - ever since.

Years later, in the house Sandy shared with college roommates there was an old green couch and next to it sat a roommate's acoustic guitar in a stand. Upon entering the room, Doug asked permission to play the guitar. Sandy watched as he fiddled with the tuners and started to play the most beautiful music she had ever heard. That first year he bought her a guitar and started teaching her to play this beautiful music.

"span"Over twenty five years have passed and throughout they have created and shared Hawaiian slack key guitar and ukulele in the traditional style. Inspired by traditional greats Raymond Kane, Sonny Chillingworth, and Leonard Kwan; contemporary greats Keola Beamer, Ledward Kaapana, and Moses Kahumoku; they have dedicated their lives to perpetuating slack key music.

"span"Ho'omau - Continue the Tradition
Slack key is a family tradition. Doug amp; Sandy McMaster are prolific composers and storytellers. Doug became known as the 'slack key guy' after receiving the seal of approval from a local slack key master. They began giving regular concerts with special emphasis on sharing the history of the beautiful and rare Hawaiian tradition. These concerts are held in the Hanalei Family Community Center against the backdrop of magnificent mountains, taro fields, traditional hula halau, and amazing rainbows. Visit their website for details.

Sunset Serenade International Tour Every evening underneath the ironwoods behind the lifeguard tower by Hanalei Bay, the soothing sounds of slack key serenade the sun to sleep. This too, is a family tradition first cemented with the encouragement of Aunty Edith and dog friend Betty. People from all walks of life and all over the world join them in watching the magical light shows of Hanalei Sunsets -- a new kind of international tour!

Join the Worldwide Slack Key 'Ohana (Family)
In response to our fans demands, we've released 5 instrumental music CDs, a Sunsets Screensaver, and a CD documentary of Hawaiian slack key music, and a Hawaiian Slack Key Relaxation CD. Everyone loves to take a little bit of Hanalei and the magic of ki ho'alu at sunset home with them. Our CDs bring the soothing relaxation of Hanalei and ki ho'alu to them whenever they need it in their daily lives in other parts of the world. We're your musical lifeline to memories of Hawaii!

Get the best of Sifted in your inbox

Get unlimited access to all of Sifted’s free coverage and analysis. You'll also be able to choose your preferred newsletter and report subscriptions.